Hard day at the office?

Hard day at the office? Life sucks for most people. Face it. How’s your life looking? What’s your experience? Is it all worth it?

We can kid ourselves that the routine we have is free choice. The hamster-wheel-of-life is happening, and we’re all spinning it around. But is there really an option to stop the wheel and hop off? 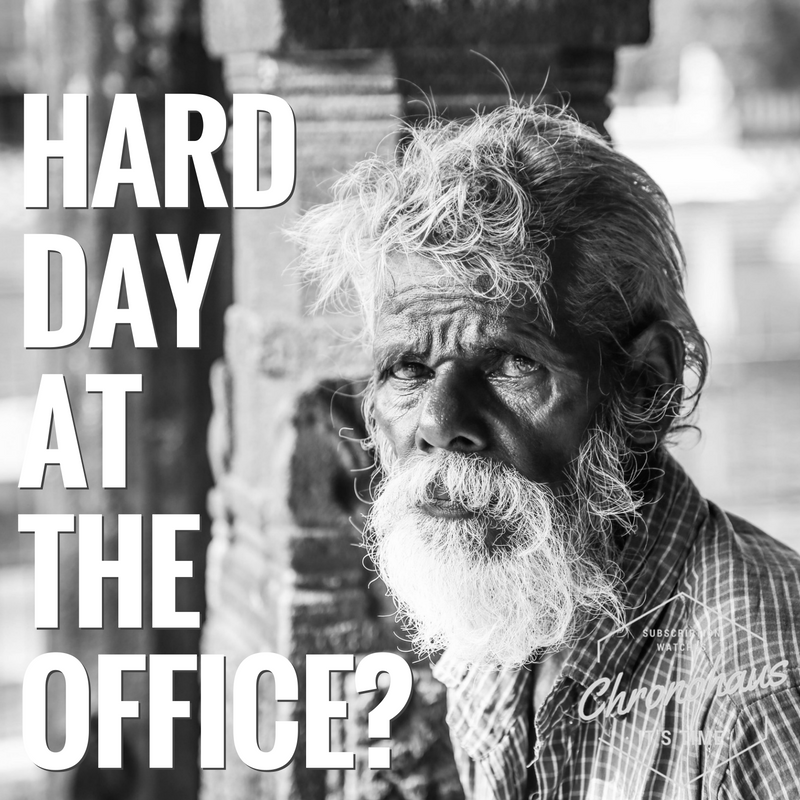 We’re all trying to keep up with the Joneses in some form or another – though few admit it. It’s a competition we’re never going to win. There’s always going to be someone wealthier, smarter, or better looking. Then there’s your neighbour who has the more recent car model than you – and you only bought yours 3 months ago….

We tell ourselves that we have freedom. You might be earning a stack-load of money, but how secure is your lifestyle? Most people can’t survive three months if they lose their job. Even if they’re a top-dog in London’s Square Mile. Why? Everyone lives up to the limit of their means. Usually 95% to 105% of their means. There’s no safety blanket.

The fear of failure keeps us on track. Warren Buffet coined the term, elevator effect. If you work in a corporate structure, the floor level you’re on signifies your achievement and social standing. Dropping five floors – through demotion or job loss is painful. But, it’s just as painful if you drop from 100th floor to 95, as it is from 10th floor to 5th floor. It’s hard losing part of what you have, regardless of where you are.

When do we party?

Our cushy modern-day lives rest on the shoulders of giants – with 3000 years of sophisticated human development behind us, we’re living the good life. However, for the average out there – things are tough. The vast majority of average salary earners (a) cant afford to buy a home, (b) couldn’t survive if they were unemployed for more than three months, (c) have little or no spare time, and (d) commonly question ‘what’s it all about’.

Back in the 1930’s, the economist John Maynard Keynes predicted that people in technologically advanced societies would eventually not need to work much at all. By when? By now. When Keynes brought this up, during the industrial revolution, the pace change and advances in technology at the time were generating incredible productivity enhancements. Ergo, the obvious conclusion was drawn: if it took less time to produce what we needed, surely we’d work less.

Yuval Noah Harari, author of Sapiens, explains that the last 500 years have seen incredible growth in human power and consumption. In 1500 AD, there were about 500 million humans on the planet, now there are about seven billion. In 1500, the the total value of goods and services produced by us all was $250 billion (in today’s money); compared with $60 billion today. In 1500, humanity consumed about 13 trillion calories of energy per day (when considering the use of food, horses, basic machinery and wind-power etc); today, we consume 1,500 trillion calories a day. Looking at the ratios – human population has increased 14-fold, production 240-fold, and energy consumption, 115-fold.

So society is now hyper-productive, and hyper efficient, so why don’t we have more free time?

Back to the hamster wheel

If you’re typical of most (and fiercely keeping up with the Joneses), you’re probably working 50 hours per week? You might also be spending 90 minutes each day commuting to work? And you’re maybe doing a few extra emails on your phone on the weekend, and even on your holiday. Did i mention holiday? Maybe you get four weeks a year, maybe five? That’s when you’re allowed to be free as a human. That’s when you get to taste your freedom. Not for too long though. Have a week here or there and then get straight back to your hamster wheel.

If you’re in your twenties, you’ve probably got a sense of freedom. Yes, you could quit that job. You could probably afford to take 6 months off and travel the globe for a while. But eventually that’ll run out.

If you’re in your 30s, its different. You probably have mortgage obligations, a car loan and credit card bills? You might have kids already – they cost a bomb. You’re considering school fees. If you’re keeping your head above water with all that, you’re maybe a little concerned about not putting enough away for a rainy day, or retirement.

Where’s the freedom and latitude really? Are we not all just slaves the to system? The only difference being we ‘think’ we’re exercising our own choice, and thus it isn’t such an issue. If you ‘choose’ to do something then it’s not really slavery, is it? But are we all just socialised to such an extent that we’re locked-in but ‘loving it’?

Capitalism (and i really believe this) has elevated the human race to much superior levels. Education, nutrition, health, peaceful living and rule of law have reached dizzying levels compared to our forefather’s time. The invisible hand has served us well. But are we not paying for this ‘liberation’ with invisible shackles? Are we not indentured servants to the system?

If you review the last five years of your life, have you really lived five different years? 60 different months? Or have you maybe lived one year (doing the same stuff), five times over? Have the last 60 months been on repeat-play?

Consciously engineer your existence. Do it. Life is about experience. Avoid debt (unless it makes you more money than it costs you). Work less, experience more. Avoid obligations and long tie-ins. Get more experience, get more experiences. Do more of the things you love. Don’t buy – just try, taste, feel and live. Do more (or less) everyday – starting from today.

Now you can now rent a house for a day, you can rent a bike for an hour. You can rent a boat for an afternoon. You can rent a movie from, and watch it on, your iPhone. And you can subscribe and chose your favourite music for your next party. You just need more time to enjoy it all. More is more.

If watches is your thing, don’t buy. Don’t tie yourself in to one. It’s a hassle. And one watch is only one watch. Why not experience as many as possible? Subscribe and enjoy more with Chonohaus!